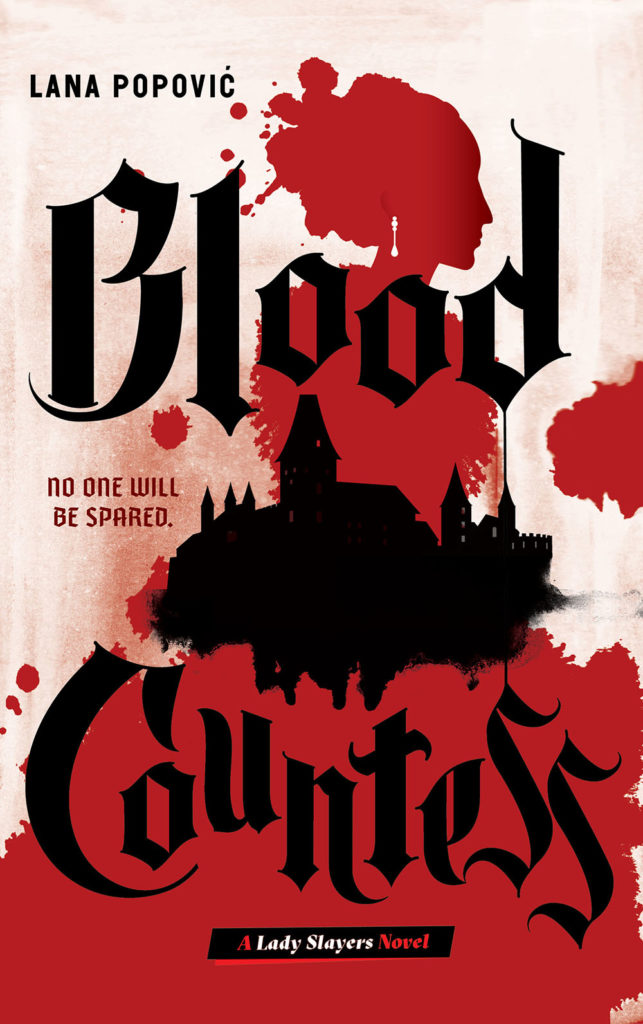 I have to confess, I found this a hard book to get through and consequently a difficult one to review. If it’s one thing reading Blood Countess has taught me, it’s that I’m rather a wuss when it comes to horror—not so much the paranormal kind of cold draughts and unexplained creaks in the night, but the sort steeped in blood and gore. Well, what did I expect, you might ask, given the title of this novel? Perhaps I should have been more prepared for what awaited me within its pages, and yet still I allowed its YA classification to lure me into believing it couldn’t be all that bad.

The thing that really intrigued me about the blurb was the villain, Lady Elizabeth Bathory, being based on the real-life woman who came to be known as Countess Dracula. I hadn’t heard of her before discovering this story, but I’d be fascinated to learn more. If she was anything like Lana Popovic’s incarnation, however, she must have been a truly evil individual. I for one found her ruthless charm, her sheer pleasure in causing others pain utterly terrifying, and it was this propensity for cruelty towards the unfortunate women in her employ that made this such an arduous read.

Even the heroine isn’t altogether likeable. I warmed to Anna at the start, identifying with her love for her family and the compassion that makes her such a good healer. When she catches the eye of the beautiful Lady Bathory and is summoned to the great house to serve as her chambermaid, I dreaded what lay in store for her. Yet, the more Anna falls under the countess’s spell, the more her goodness is swallowed up. Anna does some unforgivable things during the course of the narrative, and while I understand the fear that drives her to these lengths, her actions also render her infinitely less sympathetic.

For all that Blood Countess proved to be an uncomfortable reading experience for me, not once did I consider abandoning it. Grizzly though I found the scenes of torture and murder, I simply had to keep turning the pages to see what happened next. The author does a fantastic job of creating the Gothic atmosphere which epitomises so much historical horror, that backdrop of shadowy corridors and ever-present danger. It’s this more than anything else that ensured I read to the end, and which has me curious about the next installment in the Lady Slayers series.

For a dark and disturbing read that held me enthralled from start to finish, a wonderfully evocative atmosphere, and a villain who will feature in my nightmares for some time to come, Blood Countess by Lana Popovic gets 6/10 rainbows.

In 16th century Hungary, Anna Darvulia has just begun working as a scullery maid for the young and glamorous Countess Elizabeth Báthory. When Elizabeth takes a liking to Anna, she’s vaulted to the dream role of chambermaid, a far cry from the filthy servants’ quarters below. She receives wages generous enough to provide for her family, and the Countess begins to groom Anna as her friend and confidante.

It’s not long before Anna falls completely under the Countess’s spell—and the Countess takes full advantage. Isolated from her former friends, family, and fiancé, Anna realizes she’s not a friend but a prisoner of the increasingly cruel Elizabeth. Then come the murders, and Anna knows it’s only a matter of time before the Blood Countess turns on her, too.

Lana Popovic’s debut YA contemporary fantasy, Wicked Like a Wildfire, was published by Katherine Tegen Books/HarperCollins in August 2017.

Lana studied psychology and literature at Yale University, and law at Boston University. She is a graduate of the Emerson College Publishing and Writing program and works as a literary agent with Chalberg & Sussman, specializing in YA.

She lives in Boston, subsisting largely on cake, gimlets, and eyeliner.