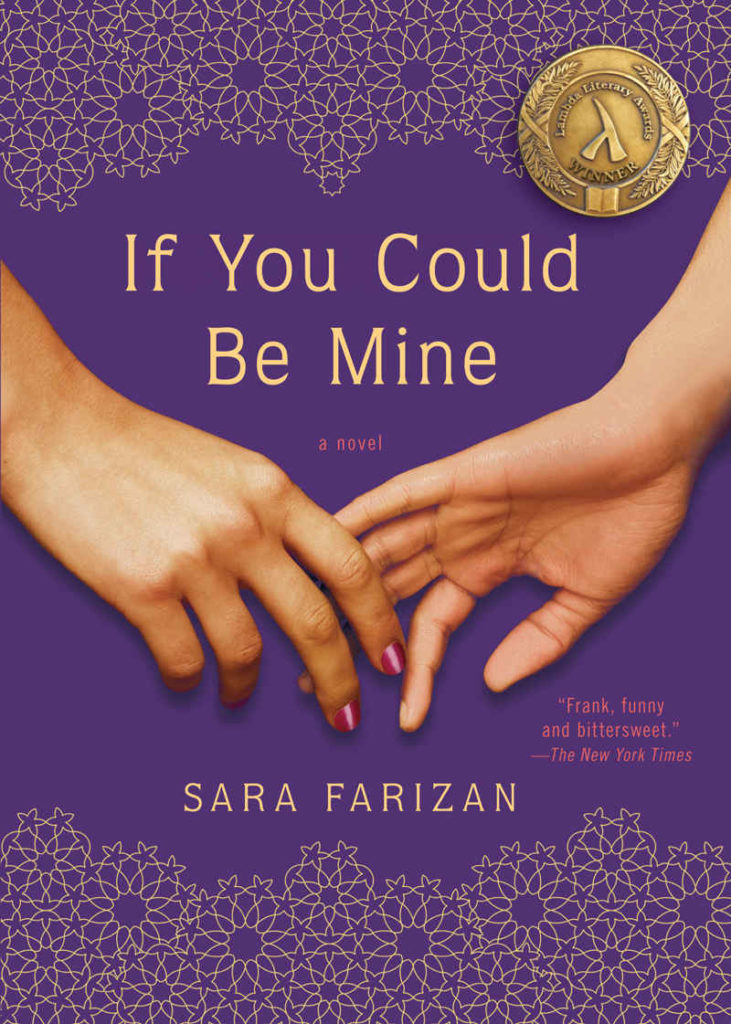 Ugh! What a difficult review this is proving to write. I can’t tell you how disappointed I was with this book, not least because I went into it with such high expectations. Though this is Sara Farizan’s debut, it’s the second of her novels I’ve read, and I’m so glad it was. If I’d picked this one up first, I might never have gone on to discover her follow-up title, Tell Me Again How a Crush Should Feel, which happens to be one of my absolute favourite YA LGBT+ stories.

That said, If You Could Be Mine does have its merits. For a short novel, it certainly packs a punch. Sahar is an immensely relatable heroine, and despite some bad decisions on her part, I found myself admiring her kindness and ambition. There’s so much potential for emotional conflict here—Sahar’s love for her best friend, the need to conceal their relationship from the law, the inevitable heartache when Nasrin becomes engaged to a suitable man. Yet, for all its promise, much of the narrative fell flat for me.

The one aspect I really enjoyed about this book was its vivid portrayal of what it’s like to grow up female in an Islamic country. In Iran, women are most definitely considered second-class citizens, denied many of the freedoms granted to men. They’re expected to cover up in public and can be arrested for as little as showing too much forearm. As for homosexuality…if Sahar’s relationship with Nasrin were ever discovered, they could both face the death penalty.

What let the story down for me was the central romance. For one thing, I disliked Nasrin from the start, finding her selfish and shallow. For another, perhaps because the reader is thrust into the midst of their relationship rather than seeing it develop, I couldn’t understand what drew the girls to each other. Yes, they shared some passionate kisses, but they never talked about anything important, and beyond the fact that Nasrin is beautiful, I was clueless as to what Sahar saw in her.

I also have to confess to feeling somewhat uncomfortable with the transgender subplot. Don’t get me wrong, I can appreciate how Sahar might view transitioning as a viable option, being ignorant of the procedures involved and desperate to find a way to be with the girl she loves. All the same, though I’m sure the author meant no offence by it, this entire storyline struck me as disrespectful to those trans young people who are genuinely struggling with their gender identity.

For a romance with an original twist and a thought-provoking glimpse into Iranian culture, If You Could Be Mine by Sara Farizan gets 6/10 rainbows.

Seventeen-year-old Sahar has been in love with her best friend, Nasrin, since they were six. They’ve shared stolen kisses and romantic promises. But Iran is a dangerous place for two girls in love—Sahar and Nasrin could be beaten, imprisoned, even executed if their relationship came to light.

So they carry on in secret—until Nasrin’s parents announce that they’ve arranged for her marriage. Nasrin tries to persuade Sahar that they can go on as they have been, only now with new comforts provided by the decent, well-to-do doctor Nasrin will marry. But Sahar dreams of loving Nasrin exclusively—and openly.

Then Sahar discovers what seems like the perfect solution. In Iran, homosexuality may be a crime, but to be a man trapped in a woman’s body is seen as nature’s mistake, and sex reassignment is legal and accessible. As a man, Sahar could be the one to marry Nasrin. Sahar will never be able to love the one she wants, in the body she wants to be loved in, without risking her life. Is saving her love worth sacrificing her true self?

Sara Farizan was born on August 2, 1984 in Massachusetts. Her parents immigrated from Iran in the seventies, her father a surgeon and her mother a homemaker. Sara grew up feeling different in her private high school not only because of her ethnicity but also because of her liking girls romantically, her lack of excitement in science and math, and her love of writing plays and short stories. So she came out of the closet in college, realized math and science weren’t so bad (but not for her), and decided she wanted to be a writer.

Sara is an MFA graduate of Lesley University and holds a BA in film and media studies from American University. She has been a Hollywood intern, a waitress, a comic book/record store employee, an art magazine blogger, a marketing temp, and an after-school teacher, but above all else she has always been a writer. Sara lives near Boston, has a cool sister, loves Kurosawa films, eighties R&B, and graphic novels, and thinks all kids are awesome.