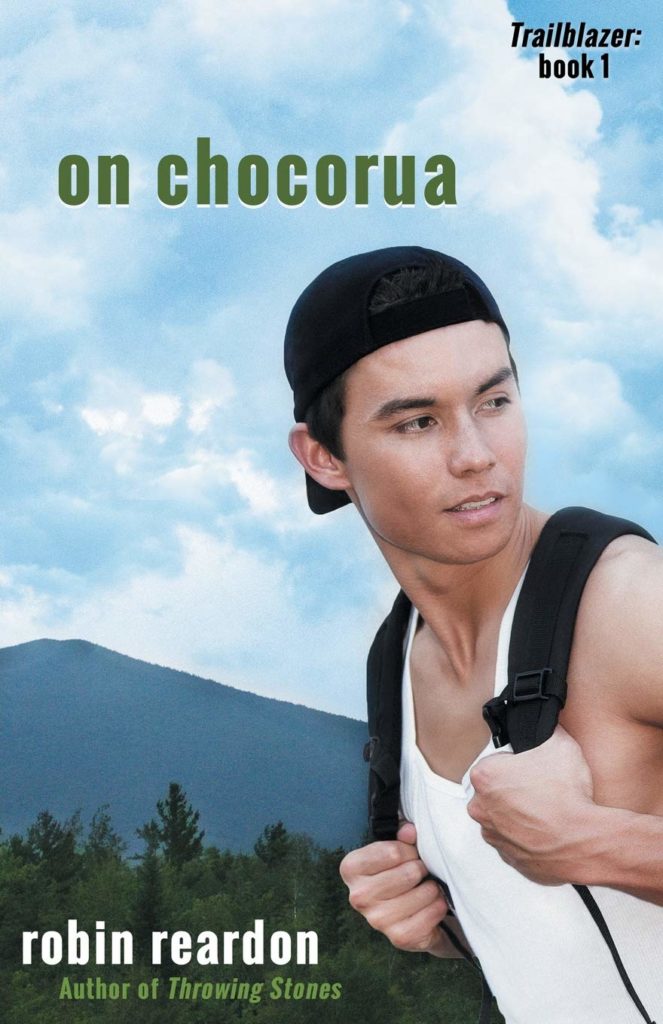 A new release from Robin Reardon is always something to look forward to, and this latest gem didn’t disappoint. On Chocorua is the first book in her Trailblazer series, a trilogy that follows gay college student, Nathan, as he scales peaks of increasing difficulty and negotiates life’s obstacles. This opening installment explores everything from grief at losing the person you love most in the world, to the thrill of budding romance and, above all, the search for acceptance.

One thing this author excels at is portraying the struggles of young men to navigate the often rocky road to maturity and self-discovery. Eighteen-year-old Nathan has a lot to contend with in this novel—starting college, coming out to his family and friends, hiking his first trails, and reconciling his crush on an unattainable straight guy with falling for his first boyfriend. I truly felt as if I were accompanying Nathan on his journey, experiencing every one of his emotions, his pleasure and pain, heartbreak and joy.

Trailblazing, as the series’ title suggests, plays a vital role in this story. I especially enjoyed how cleverly Nathan’s difficult path to discovering the appeal of hiking mirrors the highs and lows of his freshman year. It’s clear the amount of research Robin Reardon must have carried out, both into the physical demands of hiking and the geography of the trails themselves. The descriptions are so evocative, the hardships so vividly described, I could almost believe I’d walked the trails myself.

Perhaps the most special aspect of this novel for me was the interludes. Through these, the reader glimpses Nathan’s relationship with his older brother, Neil, and gains some insight into what a devastating chasm his death would have left behind. Since the car crash that killed their parents, Neil has filled the role of father to him, and Nathan adores him to the point of worship. Yet, for all that he wants to make his big brother proud, he refuses to share in Neil’s passion for hiking, a decision I’m not sure even Nathan himself fully comprehends.

Several issues are tackled during the course of this book, including that of substance abuse, namely the dangers associated with Fentanyl. Though Nathan doesn’t come into direct contact with the drug, he is forced to see first an acquaintance and then his boyfriend succumb to it, whilst being unable to do anything to prevent it. This helps him towards understanding and, to a certain extent, making peace with his own addiction—the craving for his brother’s approval and the need to be loved and accepted.

For a powerful coming-of-age story that handles some sensitive subjects with compassion and authenticity, and which left me eagerly anticipating the next book in the series, On Chocorua by Robin Reardon gets 10/10 rainbows.

A mountain. A blizzard. A young man new to hiking and to love, making mistakes in both.

First year of college. A great time to re-invent yourself. Nathan Bartlett takes the opportunity very seriously—maybe a little too seriously. And he makes mistakes.

His mistakes? Falling for a straight guy who reminds him of his beloved older brother. Getting too invested in the substance abuse disorders of two other students. And climbing a mountain in a snowstorm for all the wrong reasons.

But he also develops friendships that will be his for life. He faces his inner demons and comes up with a plan. And he realizes that answers to important questions are seldom waiting on the surface but must be worked for, or struggled for, or suffered for—and sometimes all three.

Nathan is a trailblazer on his own journey. His success will be measured not by how well he follows someone else’s path, but by whether he can forge his own. This first book in a series of three novels gets Nathan started on a journey that will teach him about himself, about life, and about love.

Robin Reardon is an inveterate observer of human nature, creating stories about all kinds of people, some of whom happen to be gay or transgender—people whose destinies are not determined solely by their sexual orientation or gender identity. She writes endings that are realistically hopeful rather than sugary and “happy ever after.”

Robin was thrilled that early readers of her work were convinced she was a gay man. Her motto is this: The only thing wrong with being gay is how some people treat you when they find out. In everything she writes, she challenges stereotypes and misconceptions about what it means to be LGBTQ+.

Interests outside of writing include singing, nature photography, and the study of comparative religion. Robin writes in a butter yellow study with a view of the Boston, Massachusetts skyline.