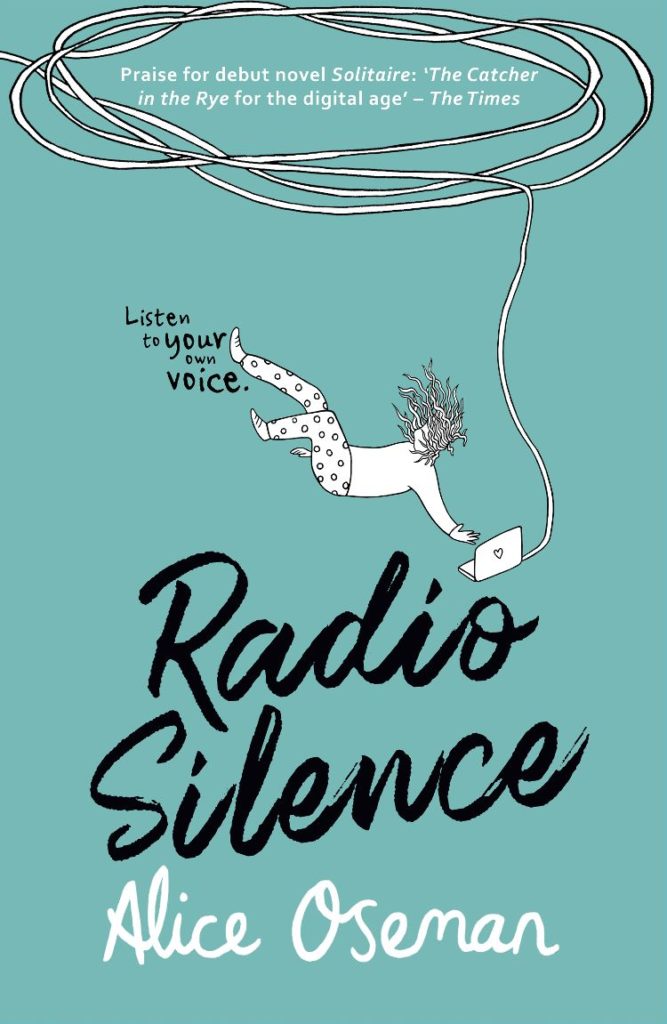 The more I read of Alice Oseman’s work, the further in awe of her skill as a writer I become. She has a talent for taking themes that have been done a thousand times before and presenting them in a way that is both current and fresh. In a great deal of young adult fiction, friendships take a backseat to the romance. Radio Silence, however, illustrates powerfully how a platonic relationship can be just as intense and fraught with potential conflict as a romantic one.

It breaks my heart when characters feel unable to be true to themselves, and Frances, the story’s narrator, is a classic example of this. At the start of the novel, she has her future mapped out—head girl, top exam results, Cambridge degree, high-paid job…because that’s what you have to do, right? Yet, for all her drive and determination, Frances shows the world a mere shadow of the funny, artistic person she is inside, choosing to hide beneath a façade of quiet studiousness.

I adored Aled, not simply for his gentleness and creative flair, but due to the part he plays in drawing Frances from her shell. As the two bond over their mutual passion for Aled’s cult podcast, Universe City, a friendship that’s as poignant and beautiful as any romance develops between them. For the first time in her life, Frances has someone with whom she can be herself. Gradually, as she indulges her love for art and sheds her sensible clothes for patterned leggings, her wonderful quirkiness emerges.

University is an important issue addressed in this novel. It seems to me, the society we live in encourages the belief that going to uni and getting a degree is the only way to be successful. As someone who opted not to go to university, despite achieving the necessary grades, I found Alice Oseman’s exploration of the education system incredibly refreshing. Every one of us is different, and it’s important for those who don’t want to go down the academic route to be aware there are other paths open to them.

Radio Silence is the second book I’ve read by this author, and the one thing I’ve come to admire most about her stories is their diversity. In addition to Frances herself, who is bisexual and half Ethiopian, there is representation for gay, lesbian, asexual, black, and Asian characters. Given the age of multiculturalism we live in, and the increasing freedom to express our gender and sexuality, it’s vital that young people see themselves reflected in the fiction they read.

For a gripping novel about friendship, fandom, and learning to be true to yourself, and which celebrates diversity in its many colourful forms, Radio Silence by Alice Oseman gets 10/10 rainbows!

What if everything you set yourself up to be was wrong?

Frances is a study machine with one goal. Nothing will stand in her way; not friends, not a guilty secret – not even the person she is on the inside. Then Frances meets Aled, and for the first time she’s unafraid to be herself.

So when the fragile trust between them is broken, Frances is caught between who she was and who she longs to be. Now Frances knows that she has to confront her past. To confess why Carys disappeared…

Frances is going to need every bit of courage she has.

Alice Oseman was born in 1994 in Kent, England. She completed a degree in English at Durham University in 2016 and is currently a full-time writer and illustrator. Alice can usually be found staring aimlessly at computer screens, questioning the meaninglessness of existence, or doing anything and everything to avoid getting an office job.

Alice’s first book, Solitaire, was published when she was nineteen. Her second, Radio Silence, was released in early 2016, and her third, I was Born for This, in 2018.