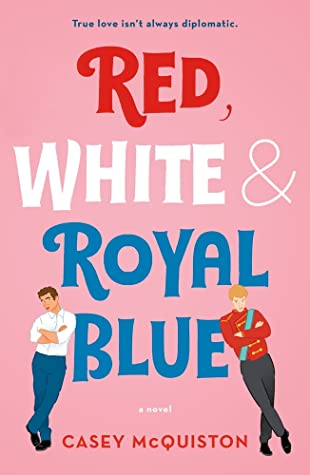 This is one of those novels the author in me really wishes I’d come up with. The moment I heard the premise for Red, White and Royal Blue—a romance between the son of the US president and a prince of England—I was like…wow, why didn’t I think of that? It’s just the sort of idea that would have sent my muse into an excited dance. Then again, the reader part of me is sincerely glad I didn’t write this book. If I had, I would never have been able to discover and enjoy it the way I did.

Enemies-to-lovers romances are always so much fun and this one is no exception. The sniping between the heroes is sharp and laugh-out-loud funny, and their first encounter in the narrative where they both wind up crashing into the £70,000 royal wedding cake had me in stitches. Yet, the hostility between them only serves to make their budding relationship all the more powerful, and in fact, this is one of the most poignant and heartwarming love stories I’ve read in a while.

Which brings me neatly onto the protagonists. It can sometimes take time to truly connect with a character, but in Alex’s case, I warmed to him at once. He’s the perfect blend of geeky intelligence and friendly charisma that appeals to me and which makes him the ideal counterpart to Prince Henry’s shy reserve. Though they’re incredibly different, one thing these young men have in common is the desire to do some good in the world, and watching their bond develop as they grew closer was wonderful.

The strange thing is, given how much I loved the concept behind this book, I was initially unsure whether to pick it up. This has to do with it being written in third person/present tense, a style I generally find jarring and difficult to get into. However, Casey McQuiston manages it with such skill and panache that I scarcely even noticed. Add into the mix the vivid characters, witty dialogue, clever humour and a romance that’s as real as it is tender, and it’s little wonder this story now ranks among my all-time favourites.

For a captivating transatlantic romance with all the feels, two swoon-worthy heroes that have earned a permanent place in my heart, and some truly memorable supporting characters, Red, White and Royal Blue by Casey McQuiston gets 10/10 rainbows!

First Son Alex Claremont-Diaz is the closest thing to a prince this side of the Atlantic. With his intrepid sister and the Veep’s genius granddaughter, they’re the White House Trio, a beautiful millennial marketing strategy for his mother, President Ellen Claremont. International socialite duties do have downsides—namely, when photos of a confrontation with his longtime nemesis Prince Henry at a royal wedding leak to the tabloids and threaten American/British relations.

The plan for damage control: staging a fake friendship between the First Son and the Prince. Alex is busy enough handling his mother’s bloodthirsty opponents and his own political ambitions without an uptight royal slowing him down. But beneath Henry’s Prince Charming veneer, there’s a soft-hearted eccentric with a dry sense of humor and more than one ghost haunting him.

As President Claremont kicks off her reelection bid, Alex finds himself hurtling into a secret relationship with Henry that could derail the campaign and upend two nations. And Henry throws everything into question for Alex, an impulsive, charming guy who thought he knew everything: What is worth the sacrifice? How do you do all the good you can do? And, most importantly, how will history remember you?

Casey McQuiston grew up in the swamps of Southern Louisiana, where she cultivated a love for biscuits and stories with big, beating hearts. She lives in the mountains of Northern Colorado, with a collection of jean jackets and her poodle mix, Pepper.