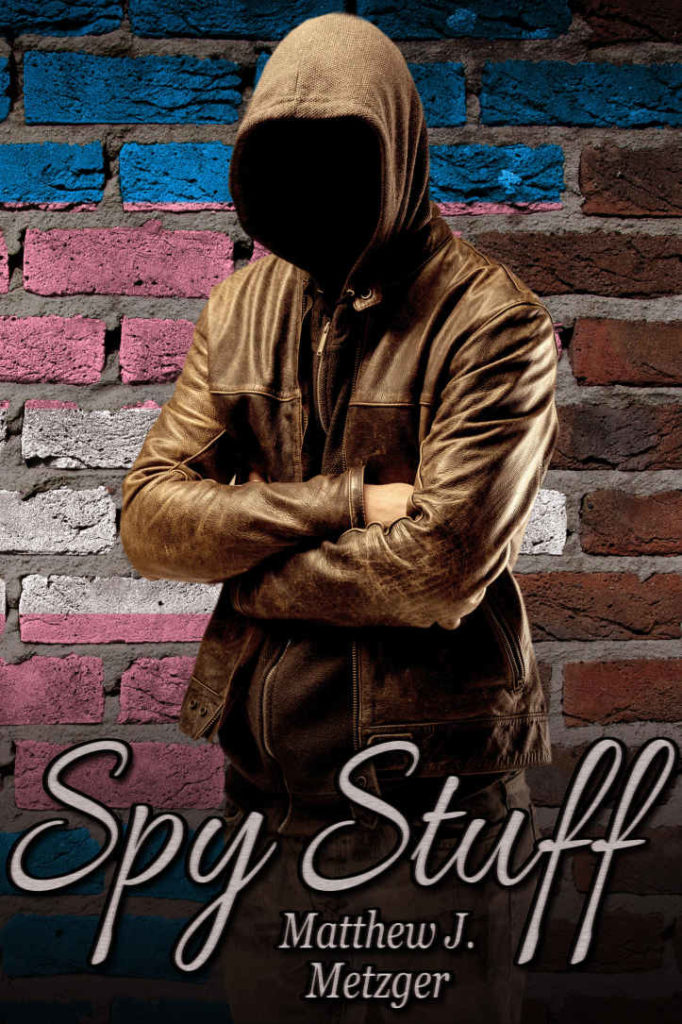 What a treat this book turned out to be! Spy Stuff by Matthew J. Metzger is one of those novels where the characters take centre stage, and as anyone familiar with my reviews will know, these are my favourite kind. There can be no denying that these particular characters, with their foul mouths and course banter, are somewhat rough around the edges. Yet, for all this, the story is surprisingly free of angst, and the overall feel is sweet and full of warmth.

I challenge any reader not to feel for Anton, the novel’s fifteen-year-old transgender hero. The narrative follows him as he starts at a new school, anxious to begin living openly as his true gender, away from all those who knew him as Natasha. We get to share his journey, experiencing his dreams and fears, his triumphs and setbacks, as he forms friendships, indulges his passion for football, and dares to hope love might be more than a distant fantasy.

Then there’s Jude—gorgeous, mouthy, irrepressible Jude with his flaming hair and marshmallow core, who takes most things in his stride and doesn’t give a damn what anyone thinks. I fell in love with him the moment he leapt off the page at me, and so it was easy to see why Anton would do the same. Jude’s the sort of person anyone would be lucky to have on their side, and his and Anton’s blossoming romance is so moving and beautifully done that it made my heart ache.

But Spy Stuff is as much about friendship as it is a love story. Having endured years of bullying and prejudice at his last school, Anton suddenly finds himself part of a close-knit group of friends, accepted as a boy without question, and able to be himself for the first time in his life. From outspoken Emma who takes Anton under her wing, to tough-talking but immensely loyal Walsh, I adored them all, and the way they play off one another had me in stitches!

Above all, what makes this book so special is its authenticity. Matthew J. Metzger has penned an unflinching and far from romanticized account of everyday life for a transgender teen. From the discomfort of wearing a binder and the constant anxiety of how others will react when they learn the truth, to the pain of dealing with a father’s refusal to acknowledge his child’s gender, the author portrays it all with sensitivity, compassion and a generous dollop of humour.

For a poignant and down-to-earth story, brilliantly written and with some incredibly relatable characters, which explores the reality of living as a transgender young person, Spy Stuff by Matthew J. Metzger gets 10/10 rainbows.

Anton never thought anyone would ever want to date him. Everyone knows nobody wants a transgender boyfriend, right? So he’s as shocked as anyone when seemingly-straight Jude Kalinowski asks him out, and doesn’t appear to be joking.

The only problem is … well, Jude doesn’t actually know.

Anton can see how this will play out: Jude is a nice guy, and nice guys finish last. And Anton is transgender, and transgender people don’t get happy endings. If he tells Jude, it might destroy everything.

And if Jude tells anyone else … it will.

Matthew J. Metzger is a twenty-something British author of queer novels, primarily focusing on relationships, be they familial, platonic, sexual or romantic. He was dragged up in London, but currently lives in West Yorkshire, where he carves out a living in an office crunching numbers before going home to write books at night. Matthew particularly writes working-class queer life, and queer people who exist outside of the standard M/M romance fare written by and for well-educated, middle-class sensibilities. There be nasty words ahead, children. Better buckle up.