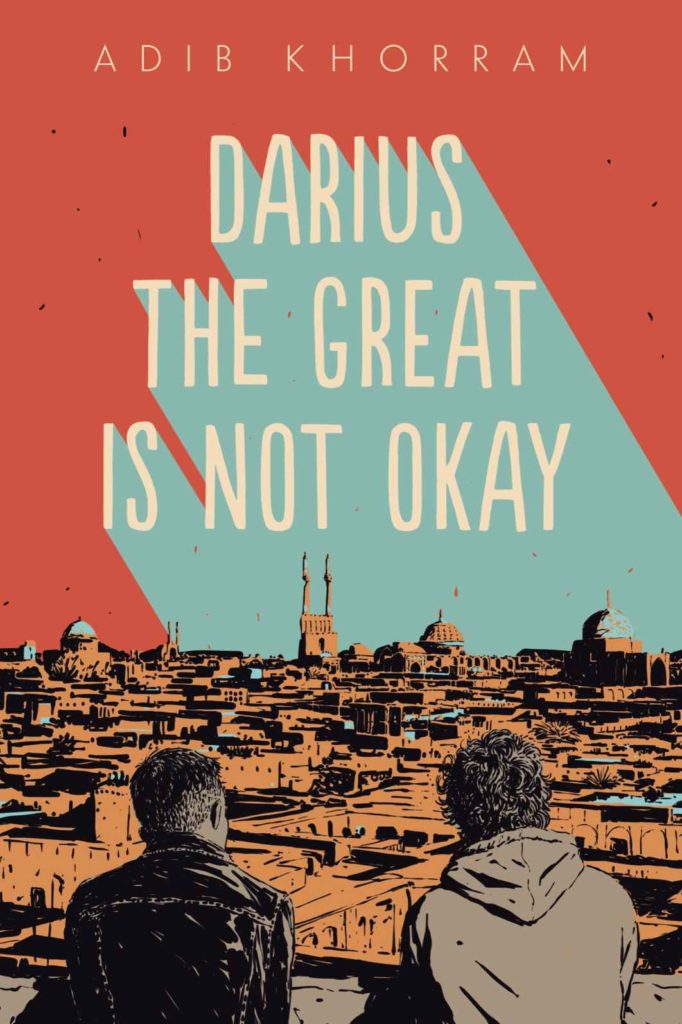 It’s fitting I should be reviewing this book during Mental Health Awareness Week, since the fact that both the hero and his father suffer from clinical depression is central to the plot. More and more people, many of them teenagers and young adults, are being diagnosed with mental conditions, and as someone who has been on anti-depressants for several years, I know how vital it is that we, as a society, become better educated and so develop a greater understanding of mental illness.

With this novel handling such a serious topic, you might expect it to be a heavy-going read, but it turned out to be charming and rather funny. Darius the Great Is Not Okay is a story about feeling inadequate and as though you don’t fit in, something so many young people will be able to relate to. I love getting a glimpse into other cultures, and so traveling to Iran with Darius to meet his Persian relatives and learn about their customs and traditions was fascinating.

Darius himself is a wonderful protagonist—sweet, geeky, and riddled with insecurity. Yet, never once does he compromise who he is or pander to the opinions of others. He always remains true to himself, no matter the bullying he endures for it, and I admired this courage enormously. He also nurtures a fervent passion for tea, the more exotic the better, and being a tea addict myself, this naturally made him a boy after my own heart.

The book explores several of the important relationships in Darius’ life—those with his ill but still indomitable grandfather, his grandmother, and his younger sister—but there are two that are especially pivotal. The first is the thorny and hugely complex dynamic between him and his dad, which stems from a classic case of miscommunication. What with Darius’ certainty that his dad is disappointed in him, and his father’s tendency to voice his concerns in the form of criticism, the pair has a ton of issues to work through.

Then there’s Sohrab, the Persian boy who fast becomes the only true friend Darius has ever known. I found it immensely touching, watching the two of them bond over football and shared confidences. Sohrab gets Darius from the outset, sensing when emotion threatens to overwhelm him and when he simply needs to be quiet. With his help, Darius gradually carves out a place for himself, and although the LGBT element is very subtle, how the boys feel about one another is undeniable.

If there’s one aspect of the narrative that grated on me a little, it was the way Adib Khorram often has Darius referring to his family members by their names as opposed to Dad, Grandfather, etc…. I think his intention was to illustrate Darius’ belief that his family finds him wanting, thus causing him to feel distanced from them. If so, his strategy did have the desired effect, but this didn’t prevent it from getting on my nerves at times.

For an inspirational hero, the vivid portrayal of Persian culture, and a poignant story that deals with some deep issues with humour and compassion, Darius the Great is Not Okay gets 8/10 rainbows.

Darius doesn’t think he’ll ever be enough, in America or in Iran.

Darius Kellner speaks better Klingon than Farsi, and he knows more about Hobbit social cues than Persian ones. He’s about to take his first-ever trip to Iran, and it’s pretty overwhelming–especially when he’s also dealing with clinical depression, a disapproving dad, and a chronically anemic social life. In Iran, he gets to know his ailing but still formidable grandfather, his loving grandmother, and the rest of his mom’s family for the first time. And he meets Sohrab, the boy next door who changes everything.

Sohrab makes sure people speak English so Darius can understand what’s going on. He gets Darius an Iranian National Football Team jersey that makes him feel like a True Persian for the first time. And he understands that sometimes, best friends don’t have to talk. Darius has never had a true friend before, but now he’s spending his days with Sohrab playing soccer, eating rosewater ice cream, and sitting together for hours in their special place, a rooftop overlooking the Yazdi skyline.

Sohrab calls him Darioush–the original Persian version of his name–and Darius has never felt more like himself than he does now that he’s Darioush to Sohrab. When it’s time to go home to America, he’ll have to find a way to be Darioush on his own.

Adib Khorram is the award-winning author of Darius the Great Is Not Okay. If he’s not writing (or at his day job as a graphic designer), you can probably find him trying to get his 100-yard freestyle under a minute, learning to do a Lutz Jump, or steeping a cup of Oolong. He lives in Kansas City, Missouri, where people don’t usually talk about themselves in the third person.