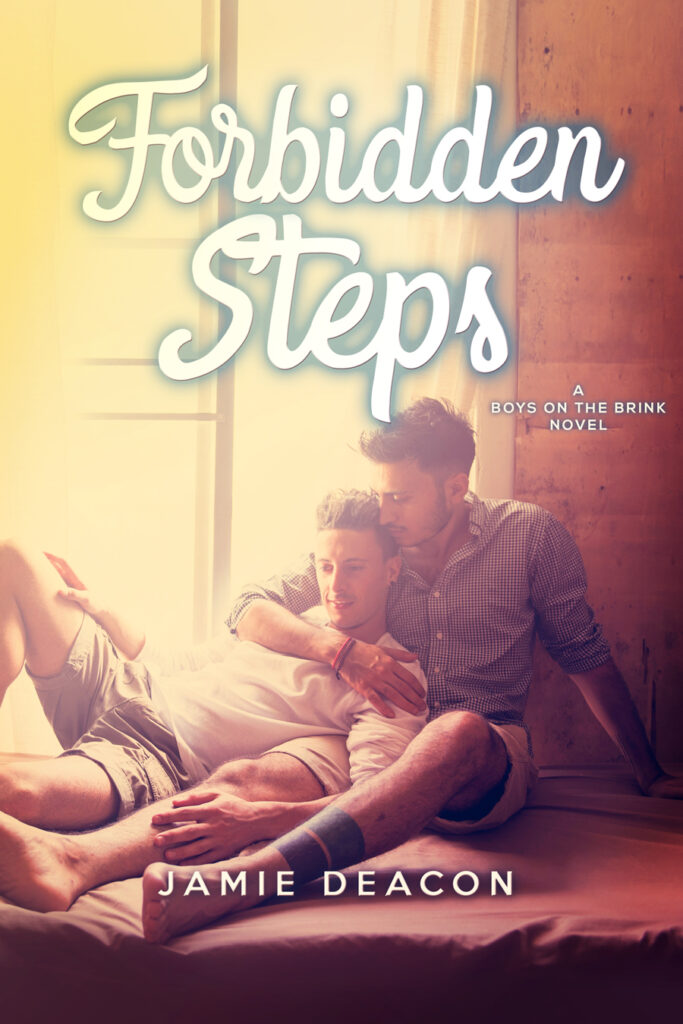 Desire draws them together; their family threatens to tear them apart…

The past months have been rough on Taylor. His parents’ marriage imploded, his boyfriend dumped him, and he feels like an interloper in his stepdad’s home. He’s counting down the days until he leaves for university. If not for his sister, he’d put all this behind him and never look back. Then Taylor’s stepbrother returns from Australia, and keeping his distance becomes far harder than he expected.

A year ago, Ben fled across the world with only his backpack and a battered heart. Now he’s home for the summer and everything’s changed. A new stepmother occupies the space where his mum should be, and his friends are in Thailand without him. There’s also a boy sharing his bedroom—a beautiful, belligerent boy who Ben can’t stay away from, even though their relationship could shatter their already fragile family.

When I open the front door, I almost fall over someone perched on the top step.

Ben looks up from tying his trainers, eyes widening. “Uh, hey. What’re you doing up?”

“Could ask you the same thing.” After all, he’s the one who’s just flown across the world.

“Body clock’s up the creek. Woke up and couldn’t drop off again.”

I don’t respond, didn’t come out here to talk. No one else was even supposed to be awake. I lower myself onto the bottom step, careful to keep an arm’s length between us, and tighten my laces.

“Thought I may as well go for a run,” Ben says. “Usually helps me relax. You, too?” His gaze takes in my running gear.

I lift one shoulder in a half shrug; my clothes speak for themselves. Standing, I fish my iPod from my pocket and start up the driveway.

I pause, turning. Ben’s got to his feet, arms hooked behind his head in a stretch. Christ, he’s in good shape, far more built than in his photos. I noticed as much last night while he undressed. What was it he told Mum he’d been doing in Oz? Picking bananas? Well, it’s certainly done wonders for his physique. I’m already checking him out when I remember he’s off limits. Hastily, I peel my gaze from his long legs, the muscles rippling beneath bronzed skin, only to get an eyeful of his biceps. Warmth flares in my cheeks. I stare down at my iPod, fiddling with it in a show of disinterest. Why does he have to be so fucking attractive?

“Mind if I run with you?” Ben asks. If Buddy could talk, he’d sound something like my stepbrother, all good-natured eagerness. “Since we’re both out here.”

“Whatever,” I tell him, although I do mind. I mind a lot and curse myself for not saying as much. If it had been anyone else, I would have, but Ben’s genuine friendliness is making it far harder to keep my distance than I expected.

I turn and break into a run, not waiting to see if Ben decides to follow. He draws level with me a short way along Fairfield. I focus straight ahead, attempting to lose myself in the rhythmic thud of my trainers on the pavement. It’s a perfect morning, the air crisp and fresh. Translucent threads of sunlight trail from a sky the colour of washed-out denim. Without slowing, I slip my earphones in and attach my iPod to my waistband.

Before I can switch it on, Ben makes another stab at conversation. “Any plans for your day, besides getting up at the crack of dawn?”

I let out a frustrated breath. He really doesn’t know when he’s fighting a losing battle. I keep my hand on my iPod, hoping he’ll get the hint. “Working.”

“The bookshop on the high street? Makes sense.”

What? Because you’ve shared a room with me for one night and now know everything about me? Not that he’s wrong. When I trawled the high street in search of a summer job, The Inkwell was my first choice. I’ve lost whole afternoons over the years among its shelves, feeding my insatiable appetite for stories. The family-owned store has often been my refuge, especially these past months.

I increase my pace, rounding the corner onto the Brookminster Road. It’s quiet this early on a Saturday, only the occasional car zipping by towards the city centre. My feet pound the concrete and send a tingling ache up my calves. If my curtness won’t convince Ben to abandon this pointless exercise, perhaps I can simply shake him off.

He matches my stride without visible effort. “You’re good. Were you on the athletics team at school? Where did you go, by the way? Not Bhelmead.”

This statement, tossed out with such certainty, immediately gets my back up. No, my parents didn’t earn enough to send Imogen and me to private school, but Dad wouldn’t have let us go even if they had. He’s never agreed with paid education; it’s one of the many things he and Mum argued about.

“The grammar,” I tell him, my tone flat.

“Ah, yeah. I would’ve remembered if I’d seen you around at school. You’re a bit of a brainiac then.”

“No need to sound so surprised.”

“I…I’m not.” Ben falters. It’s the first time he’s appeared rattled. I accept it as a victory, however small. He sucks in an audible breath. “Anyway, you must’ve been on the athletics team.”

“Sure, I can hardly speak for laughing.” Enough with the fucking inquisition. My finger hovers next to my iPod. All I want is to drown myself in some mindless techno and forget everything for a while.

“But that’s crazy,” Ben says, panting slightly. “My coach at Bhelmead would’ve snapped you up. Did you not try out?”

I don’t dignify this with a response. The truth is, up until a few weeks into my final year, I was on the athletics team. If I hadn’t been, I might never have met Liam Knowles and these past months would’ve played out very differently. Why my stepbrother thinks this is any of his business, though, is beyond me.

It’s so tempting to keep running, to put on a spurt and leave him coughing up dust, but I resist. Since Ben flatly refuses to take the hint, I’ll have to spell it out, lay down the ground rules in a way not even he can misunderstand. I slow to a stop and spin to confront him, arms folded.

I glare back. The sunlight picks out the freckles dusting his nose and catches the red in his hair so that it gleams like gold shot through with copper.

“Here’s the deal,” I say. “Neither of us asked for this, and I sure as hell didn’t want it. So how about you leave me alone and I’ll do the same for you?”

Ben flinches as though I’ve slugged him across the face. Then his expression hardens. “Fine. If that’s what you want.”

“Fine.” Without another word, he moves past me and continues jogging along the road.

Guilt, sharp and unexpected, jabs me in the ribs. I brush it off and hurry after him. It would’ve been easier to go home, but these morning runs help clear my head and keep me sane. We jog side by side, the silence stretched taut between us, until we reach the next intersection. Then, by unspoken agreement, Ben peels off to the left and I veer right.