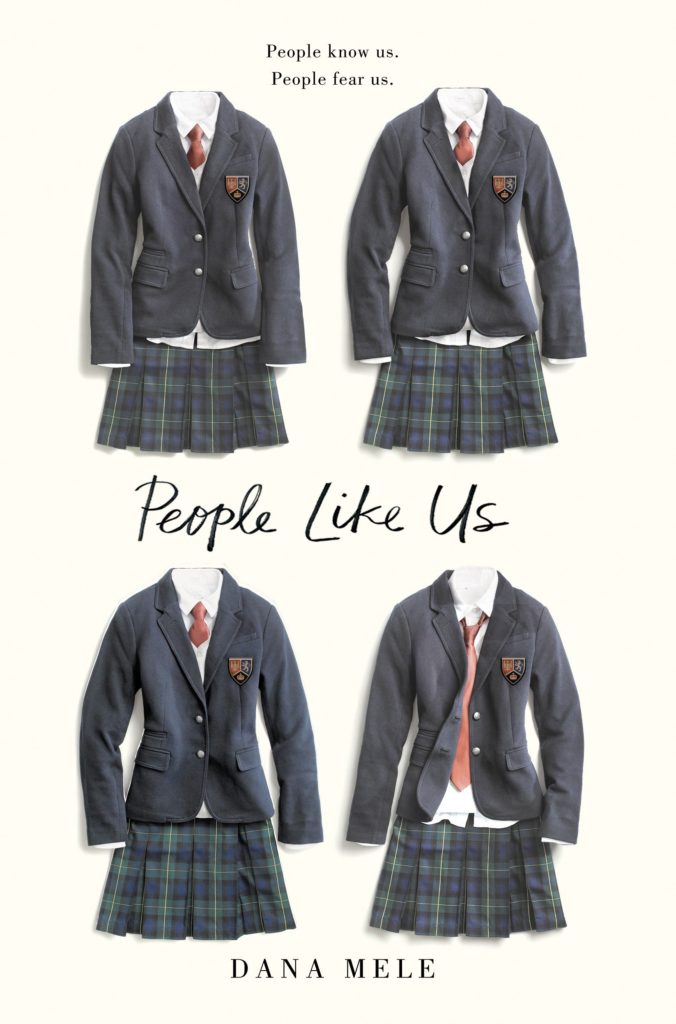 Since early childhood, I’ve reserved a special corner of my heart for boarding school stories. From Billy Bunter to Gemma Doyle, Harry Potter to my latest addiction, Truly Devious, I’ve devoured them with a voracious appetite, and if there happens to be a mystery involved, so much the better. It was therefore with considerable excitement that I snapped up People Like Us. A murder investigation which takes place at a private academy? Count me in! Yet, somehow, this fell flat for me.

To give Dana Mele her due, she does a brilliant job of creating an atmosphere of menace throughout the narrative. From the discovery of a girl’s body in the lake, through all the twists and turns, secrets and accusations, to the big reveal at the end, there’s an ever-present threat of danger, the sense that something terrible could happen at any moment. It was this, more than anything else, which kept me reading. I had to find out who was responsible and why, whether my theory would prove correct.

One thing all the best boarding school stories have in common is how they pull me in and make me a part of the day-to-day routine, until I almost feel I’ve attended there myself. Sadly, this book never quite achieved this. Perhaps it’s because Kay has already been at Bates Academy for some time before we join her, so the reader is a step behind from the outset. Whatever the reason, I felt as though I’d simply been deposited in a strange setting and expected to know my way around.

Another issue I had with the book, and which prevented me from fully connecting with it, was Kay herself. The fact is, she’s mostly pretty unlikeable. This isn’t to say she’s not an interesting heroine, and there are certainly reasons to justify her callousness. She’s suffered a lot in her teenage life, more than many people will go through during the entirety of their existence, and my heart went out to her. Still, as even her best friend would testify, Kay is a difficult person to like sometimes.

That said, some of the character dynamics in this novel were fascinating—Kay’s unrequited love for her best friend, Bri; her confusion of hurt and longing for her bad-boy ex; the unlikely friendship that develops between her and the quirky and unconventional Nola, a fellow pupil Kay once bullied. I also appreciated the fact that the author doesn’t make a big deal of Kay’s sexuality. We’re aware she’s bisexual, and that Bri is her first crush on a girl, but this is merely an additional layer to the plot, not the focus.

For a suitably dark atmosphere, an interesting if not wholly sympathetic heroine, and some twists I didn’t see coming, People Like Us by Dana Mele gets 6/10 rainbows.

Kay Donovan may have skeletons in her closet, but the past is past, and she’s reinvented herself entirely. Now she’s a star soccer player whose group of gorgeous friends run their private school with effortless popularity and acerbic wit. But when a girl’s body is found in the lake, Kay’s carefully constructed life begins to topple.

The dead girl has left Kay a computer-coded scavenger hunt, which, as it unravels, begins to implicate suspect after suspect, until Kay herself is in the crosshairs of a murder investigation. But if Kay’s finally backed into a corner, she’ll do what it takes to survive. Because at Bates Academy, the truth is something you make…not something that happened.

Dana Mele writes all manner of fiction. She is a bookseller as well as a writer, and her short stories were nominated for the Pushcart Prize in 2015 and 2016. Dana’s debut novel People Like Us was published in 2018 and she is currently working on her second.

Dana has a B.A. in Theatre Studies from Wellesley College, a M.Ed. from Lesley University, and a law degree from Syracuse University. She lives in the Catskills with her family. In her free time, Dana enjoys sandwiches, snow, and board games.