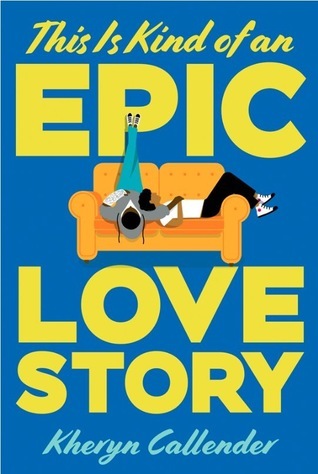 What a perfect title for a novel that has all the elements of a classic romance—the hot glances and passionate kisses, the missteps and false starts. Yet, the story has none of the sappiness or grand gestures that feature in the movies the protagonist is such a fan of. If there’s one message I took away from This is Kind of an Epic Love Story, it’s that relationships are never straightforward. There will inevitably be obstacles and challenges, disappointments and frustration, but so long as you’re willing to work together, you might just build something truly special.

Emotionally conflicted characters are my favourite to read about, and Nate certainly fits into this category. He might be an aspiring screenwriter, but he doesn’t believe happy endings exist in real life. His dad died seven years ago, leaving his mum grieving and alone, while Florence, Nate’s best friend turned girlfriend, broke up with him after kissing another girl. As he and Flo struggle to redefine their friendship, Nate decides it’s far safer to remain single than risk getting hurt again. Then the childhood friend he hasn’t seen or spoken to in five years moves back to town, sorely testing his resolve.

It’s easy to understand what draws Nate to Ollie; I fell for his gentleness and sweet honesty pretty hard myself. I also totally get why Nate is so afraid of losing him. When they were twelve, just before Ollie left for his new home across the country, Nate plucked up the courage to kiss him, after which Ollie didn’t so much as reply to his texts. Now that they’re rediscovering their friendship, Nate’s wary of confessing his feelings in case he scares Ollie off again, and even if Ollie does feel the same, surely a high school romance will only end in tears, so why put his heart on the line?

As a visually impaired person, I’m always thrilled to see disability represented in YA fiction, especially when it’s done with as much sensitivity and consistency as it is here. Ollie has been profoundly deaf since he caught Meningitis as a child. He communicates with those around him through a combination of lip-reading, sign language, and typed messages, and there isn’t a single instance when he hears something he shouldn’t. That said, I loved the fact that the author never makes a big deal of it. Ollie’s hearing impairment doesn’t define him; it’s simply one part of who he is.

For a feel-good romance that left me grinning from ear to ear, a wonderfully conflicted protagonist, and a brilliant portrayal of disability, This is Kind of an Epic Love Story gets 9/10 rainbows!

Although he’s the ultimate film buff and an aspiring screenwriter, Nate’s seen the demise of too many relationships to believe that happy endings exist in real life.

Playing it safe to avoid a broken heart has been his MO ever since his father died and left his mom to unravel—but this strategy is not without fault. His best-friend-turned-girlfriend-turned-best-friend-again, Florence, is set on making sure Nate finds someone else. And in a twist that is rom-com-worthy, someone does come along: Oliver James Hernández, his childhood best friend.

After a painful mix-up when they were little, Nate finally has the chance to tell Ollie the truth about his feelings. But can Nate find the courage to pursue his own happily ever after?

Born and raised in St. Thomas of the US Virgin Islands, Kacen Callender is a bestselling and award-winning author of the middle-grade novels Hurricane Child and King and the Dragonflies, the young-adult novels This Is Kind of an Epic Love Story and Felix Ever After, and the adult novel Queen of the Conquered and its forthcoming sequel King of the Rising.

They enjoy playing RPG video games in their free time.