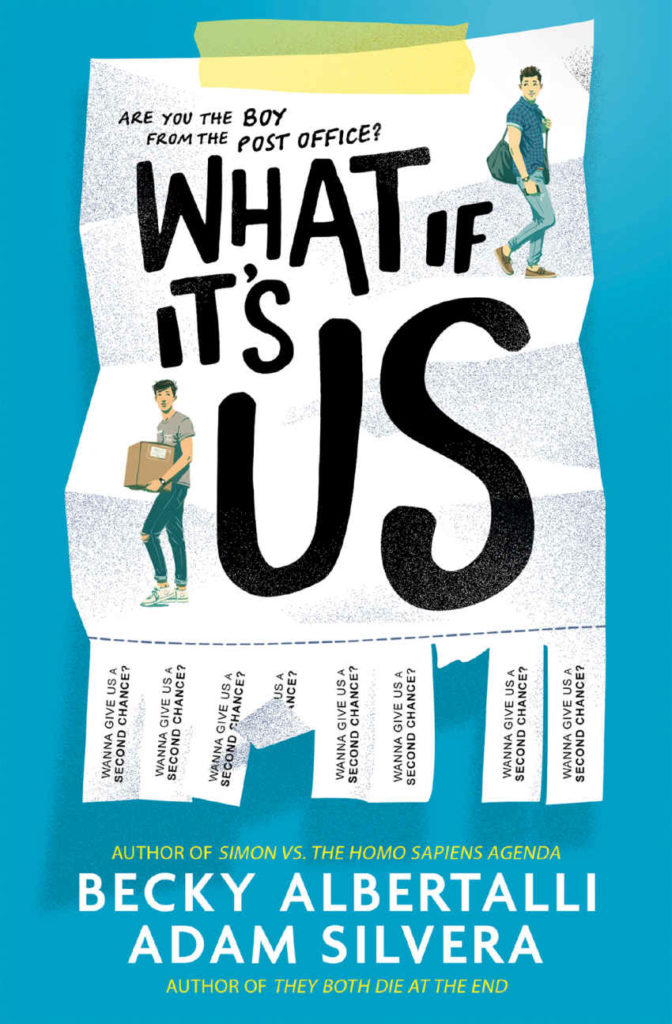 This book is just too sweet for words! It’s the sort of sweet where simply thinking about it afterwards makes my heart hurt in the best possible way. Not that it was a surprise how much I loved this story, seeing as it was co-written by two of my favourite YA authors. What If Its Us follows the summer romance as it blossoms between a pair of teenage boys, and combines Becky Albertalli’s humour and charm with Adam Silvera’s gut-wrenching poignancy to create something that’s as special as it is unforgettable.

Arthur and Ben are undeniably among the most genuine heroes I’ve had the pleasure of reading for some time, and they make an adorable couple. Arthur, with his openness, boundless enthusiasm, and passion for Broadway musicals, is the perfect accompaniment to Ben—cautious, laid-back, and bruised following a recent breakup. I loved watching their relationship play out, and, Becky and Adam, if you’re reading this, I’m keeping my fingers crossed for a sequel!

The supporting characters are truly memorable, too, and I connected with every one of them, from Jessie and Ethan, Arthur’s closest friends, to his dad who is goofy and funny and so clearly thinks the world of his son. If I had to choose a favourite, though, it would have to be Ben’s straight best mate, Dylan. Beneath all the brashness and crude jokes, he has a heart of gold and couldn’t have been more supportive since Ben came out to him. In short, he’s the kind of friend anyone would be lucky to have.

But the city itself is as important and vividly-drawn as any of the characters. I last visited New York when I was eighteen, almost twenty years ago now, but I still remember its unique atmosphere, its vibrancy and ceaseless energy. The narrative, especially those chapters from Arthur’s perspective, bring across the inherent magic of the place. He views it all with a sense of childlike wonder, seeing possibility in everything the city’s inhabitants take for granted, and it made me long to go back there.

Given that this is a book about fate and whether some people are destined to meet and fall in love, it could so easily have ended up being cheesier than a four cheese pizza with extra toppings. Yet, incredibly, it isn’t. There’s no doubt budding romances are exciting and wonderful and full of warm tingles and butterflies, but they can also be messy and complicated, fraught with missteps and potential pitfalls. It’s this exploration of the ups and downs that can arise from a new relationship where I feel the novel really excels.

For a magical setting, some vivid characters, and a cute story that’s as achingly romantic as it is realistic, What If It’s Us by Becky Albertalli and Adam Silvera gets 10/10 rainbows.

Critically acclaimed and bestselling authors Becky Albertalli and Adam Silvera combine their talents in this smart, funny, heartfelt collaboration about two very different boys who can’t decide if the universe is pushing them together—or pulling them apart.

Arthur is only in New York for the summer, but if Broadway has taught him anything, it’s that the universe can deliver a showstopping romance when you least expect it.

Ben thinks the universe needs to mind its business. If the universe had his back, he wouldn’t be on his way to the post office carrying a box of his ex-boyfriend’s things.

But when Arthur and Ben meet-cute at the post office, what exactly does the universe have in store for them . . . ? Maybe nothing. After all, they get separated. Maybe everything. After all, they get reunited. But what if they can’t nail a first date even after three do-overs? What if Arthur tries too hard to make it work and Ben doesn’t try hard enough? What if life really isn’t like a Broadway play? But what if it is?

Born and raised in the suburbs of Atlanta, Georgia, Becky Albertalli is the award-winning author of Simon Vs the Homo Sapiens Agenda now a major motion picture: Love, Simon. Her other works include: The Upside of Unrequited, Leah on the Offbeat, and What If It’s Us (in collaboration with Adam Silvera).

Adam Silvera is the New York Times bestselling author of They Both Die at the End, More Happy Than Not, History Is All You Left Me, and What If It’s Us with Becky Albertalli. All his novels have received multiple starred reviews. He worked in the publishing industry as a children’s bookseller, community manager at a content development company, and book reviewer of children’s and young adult novels. He was born and raised in New York. He lives in Los Angeles and is tall for no reason.