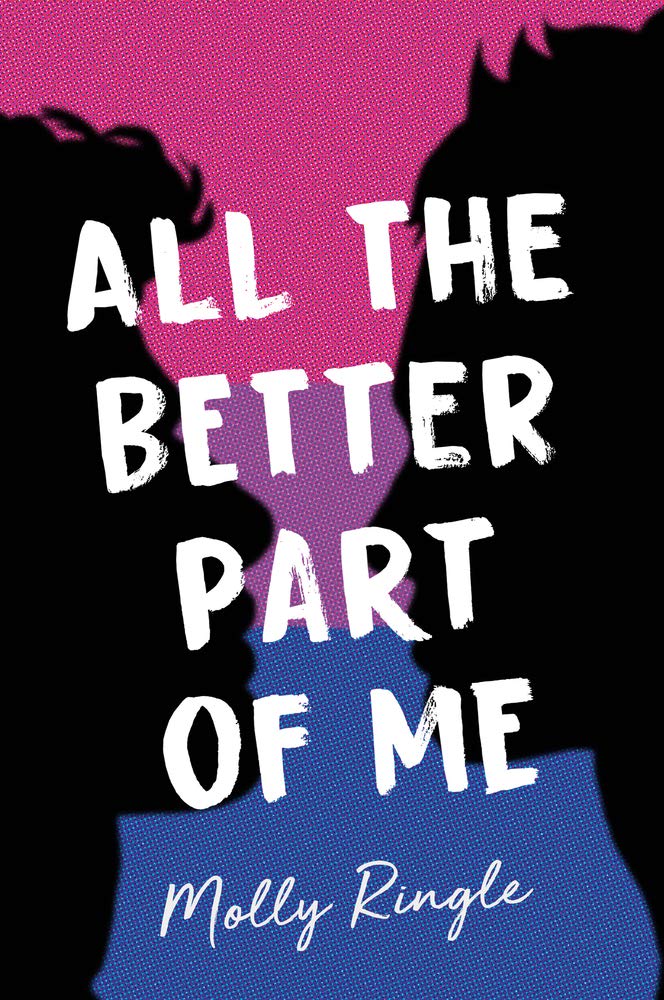 I could spend pages gushing over how much I loved this book! I have a massive soft spot for friends-to-lovers romances, and All the Better Part of Me ranks among my favourites. Essentially, this is a story about coming out, growing up, and finding the courage to stand up for the things you want in life. It has all the evocative writing and authenticity I so admire in Molly Ringle’s work, not to mention bucket loads of warmth and just the right amount of humour.

Why did I fall so hard for this novel? Largely because of Sinter Blackwell, its protagonist. Well, his name alone is reason enough, being one of the coolest I’ve come across in a character, but he’s also incredibly sexy. With his piercings and eyeliner, crazy hair and affinity for New Wave music, it’s little wonder Fiona adores him and is desperate to have him star in her film about young lovers in the ‘80s. More than this, though, he’s a genuinely nice person. Sinter makes mistakes, no doubt about that, but he never sets out to hurt anyone.

But while Sinter is my dream fictional hero, Andy, his best friend and love interest, is my ideal guy in real life. Sweet, geeky and with a heart so big it’s liable to be trampled, he complements perfectly Sinter’s intensity and impulsiveness. Watching the slow blossoming of their relationship was truly special. Even when they’re thousands of miles apart, living on opposite sides of the pond and communicating mostly via flirty text messages, their chemistry is undeniable.

However, Sinter’s path to happiness is by no means a smooth one. For all that he flaunts his makeup and dyed hair, and takes a perverse pleasure in presenting an ambiguous front to those around him, the reality of coming out to his rigidly conservative parents, let alone the rest of the world, is another matter entirely. Add into the mix his director, Fiona, with whom he has a brief fling which nevertheless has far-reaching consequences, Sinter has plenty of obstacles to negotiate.

Sinter’s bisexuality is handled particularly well. At the start of the story, he has only dated girls and imagines himself marrying and having children some day. Yet, glimpses of past same sex experiences—most crucially, the kiss he shared with Andy when they were fifteen—sew the seed of doubt. Given Sinter’s willingness to snog his best friend, and his desolation when the two of them went their separate ways for college, the gradual realisation of his feelings for Andy seems wholly natural and in no way contrived.

For a tender and poignant romance, a gorgeous hero, and the perfect balance of humour and realism, All the Better Part of Me by Molly Ringle gets 10/10 rainbows!

It’s an inconvenient time for Sinter Blackwell to realize he’s bisexual. He’s a 25-year-old American actor working in London, living far away from his disapproving parents in the Pacific Northwest, and enjoying a flirtation with his director Fiona. But he can’t deny that his favorite parts of each day are the messages from his gay best friend Andy in Seattle—whom Sinter once kissed when they were 15.

Finally he decides to return to America to visit Andy and discover what’s between them, if anything. He isn’t seeking love, and definitely doesn’t want drama. But both love and drama seem determined to find him. Family complications soon force him into the most consequential decisions of his life, threatening all his most important relationships: with Andy, Fiona, his parents, and everyone else who’s counting on him. Choosing the right role to play has never been harder.

Available to preorder from Amazon US and Amazon UK

Molly Ringle was one of the quiet, weird kids in school, and is now one of the quiet, weird writers of the world. She likes thinking up innovative romantic obstacles and mixing them with topics like Greek mythology, ghost stories, fairy tales, or regular-world scandalous gossip. She’s into mild rainy climates, gardens, ’80s new wave music, chocolate, tea, and perfume (or really anything that smells good).

She has lived in the Pacific Northwest most of her life, aside from grad school in California and one work-abroad season in Edinburgh in the 1990s. (She’s also really into the U.K., though has a love/stress relationship with travel.) She currently lives in Seattle with her husband, kids, corgi, guinea pigs, and a lot of moss.