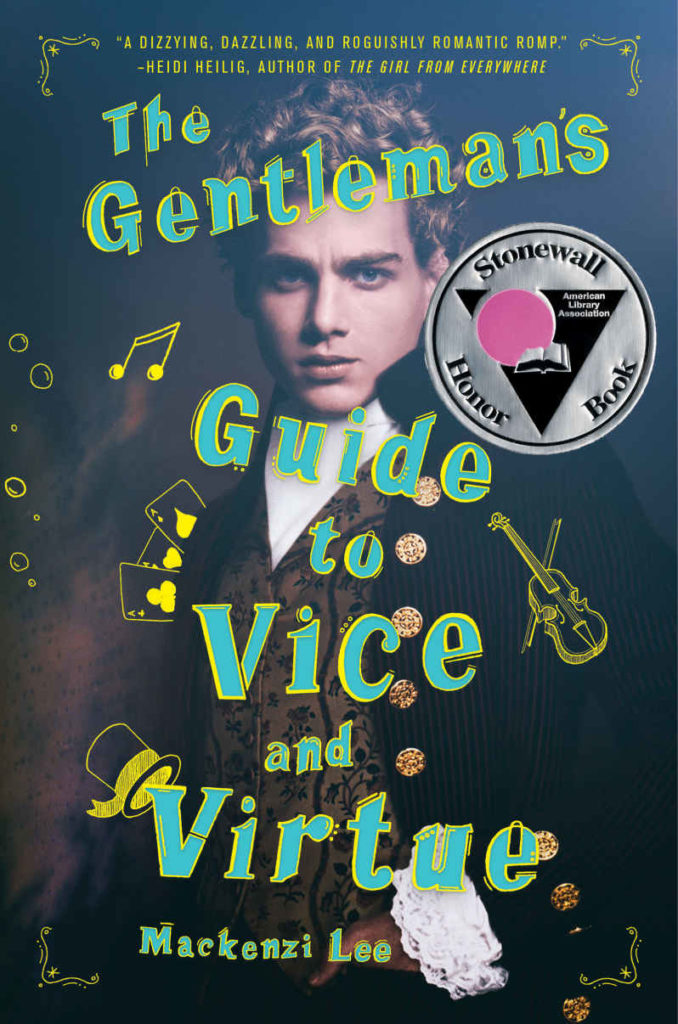 This book is just so much fun! Pirates, mad scientists, forbidden love, and a deadly chase…what more could I ask for in a historical adventure? From the blurb, I could tell The Gentleman’s Guide to Vice and Virtue would be unlike anything I’d read before. I had the sense that it would be hugely entertaining, but what I didn’t expect was that it would be as poignant as it is funny, or that it would make me cry as much from heartache as with laughter.

Monty is a fantastic hero, incredibly flawed as the best characters tend to be. He’s reckless to the point of selfishness—at least in the beginning—intent on nothing but the quest for pleasure, which often involves falling into bed with whomever takes his fancy, male or female. I have to admit, there were numerous occasions where I wanted to sit him down and give him a good talking to, and naturally, it’s only a matter of time before his outrageous behaviour leads him into trouble.

Yet, also like the best characters, there’s more to Monty than initially meets the eye. As the story develops, more is revealed about his past and the father who despises him, so that I gradually came to understand why Monty is the way he is. The blossoming romance between him and his closest friend is particularly powerful. Monty’s love for Percy is his saving grace, the one thing that keeps him from veering completely off the rails, and by the end of the novel he’s a far better person than at the start.

Characters being discovered to have hidden depths is a recurring theme in this book. First there’s Percy, Monty’s rock and steadying influence, the friend who’s always there, calm, unshakable, but who conceals a secret that will tilt Monty’s world on its axis. Then there’s Monty’s younger sister, Felicity. She plays the role of dutiful daughter, seemingly with no room in her head for anything but romance novels, while harbouring a sharp intelligence and an ambitious outlook for her future well beyond her time.

Though this is essentially a light-hearted romp across Europe, packed with high jinks and hilarious moments, the novel does have a darker side. From abuse and racism, to class prejudice and the stigma associated with epilepsy, Mackenzi Lee tackles some weighty issues. I doubt any historian would hold this book up as an example of historical accuracy, but really…who cares? Everything from the gorgeous backdrops to the attitudes of the period felt authentic, and for me, this is all that matters.

For the brilliant character development, some vividly-described settings, and a suspenseful plot full of twists and turns, The Gentleman’s Guide to Vice and Virtue by Mackenzi Lee gets 10/10 rainbows.

Henry “Monty” Montague was born and bred to be a gentleman, but he was never one to be tamed. The finest boarding schools in England and the constant disapproval of his father haven’t been able to curb any of his roguish passions—not for gambling halls, late nights spent with a bottle of spirits, or waking up in the arms of women or men.

But as Monty embarks on his Grand Tour of Europe, his quest for a life filled with pleasure and vice is in danger of coming to an end. Not only does his father expect him to take over the family’s estate upon his return, but Monty is also nursing an impossible crush on his best friend and traveling companion, Percy.

Still it isn’t in Monty’s nature to give up. Even with his younger sister, Felicity, in tow, he vows to make this yearlong escapade one last hedonistic hurrah and flirt with Percy from Paris to Rome. But when one of Monty’s reckless decisions turns their trip abroad into a harrowing manhunt that spans across Europe, it calls into question everything he knows, including his relationship with the boy he adores.

Mackenzi Lee holds a BA in history and an MFA in writing for children and young adults from Simmons College. She is the New York Times bestselling author of the historical fantasy novels This Monstrous Thing, The Gentleman’s Guide to Vice and Virtue, which won a 2018 Stonewall Honor Award and the New England Book Award, and its sequel, The Lady’s Guide to Petticoats and Piracy, which debuted at #3 on the New York Times bestseller list. She is also the author of Bygone Badass Broads, a collection of short biographies of amazing women from history you probably don’t know about but definitely should, based on her popular twitter series of the same name.

When not writing, she works as an independent bookseller, drinks too much Diet Coke, and romps with her St. Bernard, Queenie.