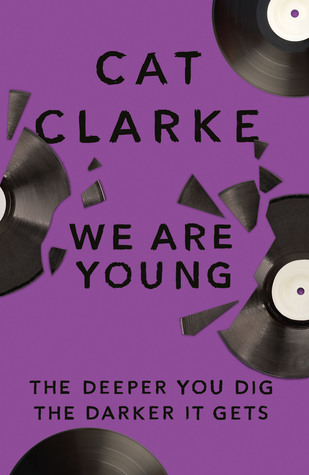 I do enjoy a good mystery, and We Are Young by Cat Clarke has plenty of twists and turns. It all begins when Evan’s new stepbrother, Lewis, is involved in a horrific car crash of which he is the sole survivor. Both the police and the media reach the obvious conclusion—that four drugged-up teenagers were on their way to a warehouse party when their vehicle ploughed into a wall. Evan, however, remains unconvinced. The victims belonged to entirely different social circles, and Lewis isn’t exactly the partying type. These doubts lead her on a quest for the truth that kept me guessing until the end.

Interwoven with this mystery is the complexity of Evan’s family life. Her parents divorced when her dad’s alcoholism spiraled out of control, and her mum has just married Tim, a local radio DJ and minor celebrity. On the surface, Tim seems a standup guy—kind, generous and more than willing to take on the care of his stepchildren. Yet, Evan soon discovers that a darkness lurks beneath the charming exterior, and she starts to wonder whether there’s more to her stepbrother’s tendency to shut himself away in his bedroom than a simple lack of social skills.

Evan’s bisexuality is handled particularly well, I think, perhaps because the author doesn’t make a big deal of it. Evan is a musician and has dated both her bandmates, Sid and Daze. Still, while she now views Sid firmly in the best friend category, her lingering attraction to Daze grows more apparent as the story progresses. I confess, Daze’s inability to be serious for more than five minutes did grate on me, and as someone who can never resist a good love story, I wish more page time had been given over to their romance, but the scenes we do see between the two girls are incredibly sweet.

The thing I love most about We Are Young is the novel’s overarching message. There’s a disturbing trend within today’s media towards vilifying young people. Anyone getting there information exclusively from the press would be forgiven for believing all teenagers are lazy, unambitious, and in a constant state of drunken disorder. With this book, Cat Clarke has gone some way to debunking this perception. She explores the increasing occurrence of mental illness in adolescents, and shows how the modern age of instant news and social media is putting teenagers under significant strain.

For a compelling mystery that combines family drama with a powerful message and a splash of romance, We Are Young by Cat Clarke gets 9/10 rainbows.

A media furore erupts, with the finger of blame pointed firmly at stoner, loner Lewis. Everyone else seems to think the crash was drugs-related, but Evan isn’t buying it. With the help of her journalist father, Harry, she decides to find out what really happened that night.

As Evan delves deeper into the lives of the three teenagers who died in the crash, she uncovers some disturbing truths and a secret that threatens to tear her family – and the community – apart for ever…

Cat Clarke is the bestselling, award-winning author of numerous YA novels, two novellas for reluctant readers and a middle grade book. She was born in Zambia and brought up in Edinburgh and Yorkshire, which has given her an accent that tends to confuse people. Cat lives in Edinburgh with her partner, two ninja cats and two decidedly non-ninja cocker spaniels. She likes cheese A LOT, especially baked camembert.