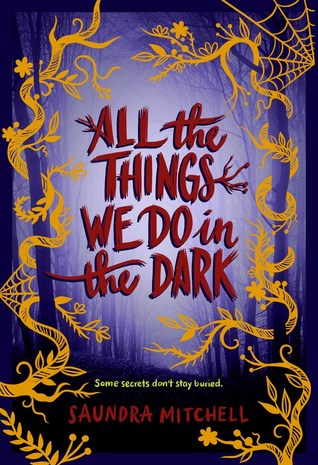 This was by no means an easy book to read, although there’s a lot to admire within its pages. First and foremost, I take my figurative hat off to Saundra Mitchell for having the courage to write this novel, an undertaking which must have been incredibly painful. Sexual abuse is a sensitive subject to tackle in any circumstances. In All the Things We Do in the Dark, however, the author shares her own experience of being raped as a young child, and this bravery and generosity blew me away.

I found Ava to be a fascinating heroine, not least because she’s the very epitome of an unreliable narrator. It’s been eight years since the man lured her back to his car with false promises and evil intentions. Now, at seventeen, Ava has put the trauma behind her, or so she believes until she discovers the body of a murdered girl in the woods. As the story progresses, Ava’s reactions and behaviour become increasingly irrational, so that it’s impossible for the reader to tell what’s real and what exists merely in Ava’s head.

My favourite part of this book, probably because it adds some sweeter moments to an otherwise dark story, was the romance. Due, I’m sure, to her traumatic past, Ava has never considered anyone in a romantic sense. Then, when Hailey returns her dropped glove, the two girls talk properly for the first time and a whole new world opens up for Ava. Hailey’s trusting nature and sweet friendliness provide a contrast to Ava’s introverted awkwardness, and I found Ava’s gradual blossoming extremely moving.

The prose, too, are utterly captivating. Saundra Mitchell’s stunning imagery and vivid descriptions left me in awe of her skill with words. The construction of the novel is also interesting. There are no chapters, only breaks between scenes, so that the entire narrative reads like a single—and sometimes surreal—stream of consciousness. Since I was taken so deep inside Ava’s thoughts, it didn’t matter when her actions grew steadily more erratic. I had no trouble following her logic, however flawed.

One thing did jar with me. Throughout the story, Ava believes she’s visited by the ghost of the dead girl and even holds conversations with her. Whether the ghost is really there or is merely a figment of Ava’s confused mind, is open to interpretation…until the end. Here we have a scene from the ghost’s perspective, where she looks down on her funeral, thus banishing any ambiguity. Personally, I would have left this out and allowed readers to reach their own conclusions.

For a dark story that combines mystery and romance, and an honest, often harrowing account of the internal scars which can result from childhood trauma, All the Things We Do in the Dark by Saundra Mitchell gets 8/10 rainbows.

Something happened to Ava. The curving scar on her face is proof. Ava would rather keep that something hidden—buried deep in her heart and her soul.

But in the woods on the outskirts of town, the traces of someone else’s secrets lie frozen, awaiting Ava’s discovery—and what Ava finds threatens to topple the carefully constructed wall of normalcy that she’s spent years building around her.

Secrets leave scars. But when the secret in question is not your own—do you ignore the truth and walk away? Or do you uncover it from its shallow grave and let it reopen old wounds—wounds that have finally begun to heal?

Saundra Mitchell has been a phone psychic, a car salesperson, a denture-deliverer and a layout waxer. She’s dodged trains, endured basic training, and hitchhiked from Montana to California. The author of nearly twenty books for tweens and teens, Mitchell’s work includes Edgar Nominee Shadowed Summer, The Vespertine series, Lambda Finalist and IAA winner All the Things We Do in the Dark, and the Camp Murderface series with Josh Berk. She’s also the editor of three anthologies for teens, Defy the Dark, All Out and Out Now. She always picks truth; dares are too easy.