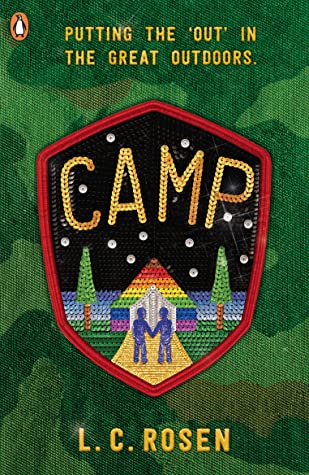 My love affair with L.C. Rosen’s stories began with Jack of Hearts (and Other Parts), and after reading Camp, I’m completely head over heels. He has a talent for writing characters that leap off the page, fully formed and larger than life, so that I really connect with them. He also knows just how to tug at my emotions. It’s a long time since a book had me in stitches the way this one did, let alone reduced me to a blubbering mess. Yet, despite how laugh-out-loud funny it is, this novel tackles some incredibly deep issues.

Randy has harboured a crush on Hudson for four years, ever since they shared a cabin during his first summer at Outland, a camp for LGBTQ+ teens. The trouble is, Hudson only goes for straight-acting types and scarcely knows nail-polish-wearing, theatre enthusiast Randy even exists. This year, however, Randy has a plan to ensure Hudson not only notices him—he has no intention of being another of Hudson’s two-week flings—but falls madly in love with him.

Watching Randy and Hudson’s blossoming romance was both beautiful and intensely painful. There can be no denying the instant chemistry between them, and Hudson is so obviously smitten it made my gut ache. Still, the fact that Randy has to hide so much of himself, foregoing his beloved musical theatre in favour of sports, broke my heart. I was desperate for their relationship to work out, but the whole time I was twisted up over what would happen once Hudson discovered Randy had been lying to him all along.

Although I had doubts as to the wisdom of Randy pretending to be someone else, I totally understood why he would go to such lengths to woo this particular boy. Hudson might be a player, but his sweet friendliness won me over. Even when he expressed the opinion that queer people should fit in with straight expectations, I couldn’t dislike him. I don’t want to give too much away for anyone who hasn’t read the book, but suffice to say, there’s far more to Hudson than his masculine persona suggests.

Camp is a glorious celebration of queerness in all its varied forms, and I adored every second of it. Besides its gay protagonist, this novel includes representation spanning the LGBTQ+ spectrum with characters identifying as lesbian, bisexual, transgender, non-binary, demi-sexual and aromantic. Essentially, it’s a story about being true to yourself, and I only wish every LGBTQ+ teenager could have a refuge like Outland where they can be themselves without fear of judgement or ridicule.

For a heartwarming romance that had me laughing and crying in equal measure, an unashamed salute to what it means to be queer, and the tackling of some important topics, Camp by L.C. Rosen gets 10/10 rainbows!

This year, though, it’s going to be different. Randy has reinvented himself as ‘Del’ – buff, masculine, and on the market. Even if it means giving up show tunes, nail polish, and his unicorn bedsheets, he’s determined to get Hudson to fall for him.

But as he and Hudson grow closer, Randy has to ask himself how much is he willing to change for love. And is it really love anyway, if Hudson doesn’t know who he truly is?