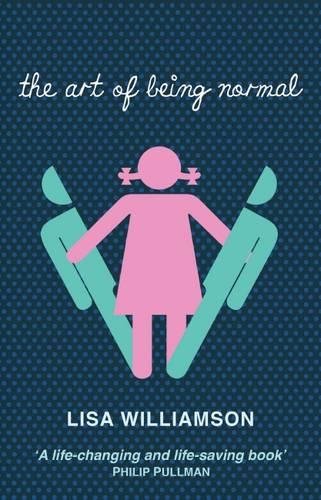 So, my feelings towards this novel are somewhat conflicted. On the one hand, The Art of Being Normal is an entertaining read that deals with some important issues in an accessible way. There’s still an underrepresentation of transgender characters in YA fiction, although this is improving all the time, and it was great to see the subject tackled here. That said, there are certain aspects to the plot which struck a jarring note with me and made me uncomfortable.

First, I really liked both David and Leo. David’s sweet friendliness aroused my empathy from the start, while Leo’s gruffness and reluctance to let anyone get close to him intrigued me. The way their friendship develops, and the fact that it takes Leo so long to warm to David and open up, is incredibly natural. One of my favourite parts of the book takes place during their impromptu weekend at the seaside, because it’s the one occasion when we get to see the two of them truly be themselves, free from the prejudices and expectations of home.

This story also features some immensely likeable secondary characters. I adored Essie and Felix, David’s quirky best friends, and found their unconditional support of her incredibly touching. David’s parents, too, are wonderful—loving and kind, and just waiting for the moment when she’s ready to talk. Though Leo has a far rougher home life and the relationship between him and his mum is decidedly rocky, his love for his sisters shines through even his blackest moods and helps to bring out his softer side.

While I found much to enjoy in this book, there were also things that troubled me. One problem relates to how David’s gender identity is handled. A transgender individual doesn’t simply “want” to be a different gender; they “are” that gender. Yet, there are references throughout the narrative to David “wanting” to be a girl, and this doesn’t tally with my knowledge of the transgender experience. I honestly don’t believe Lisa Williamson intended to create this impression, having worked with transgender teens herself in the past, but there are undoubtedly some poor word choices.

Another issue I have concerns Leo’s behaviour once he’s aware of David’s true gender. Given that Leo is transgender himself, he of all people should understand, and yet, even after David has revealed herself to be a girl and that her preferred name is Kate, Leo continues to refer to her by her birth name and by male pronouns. Coming from someone ignorant of what it means to be transgender, this would perhaps have been forgivable. However, coming from Leo who has shared David’s struggle, it struck me as disrespectful.

What I will say for this story is that the ending is perfect! It’s positive and heart-warming and left me with an enormous feeling of wellbeing. For the younger teen audience, this novel would at least introduce them to the concept of being transgender and hopefully spark some debate and compassion. As far as those identifying as trans, though, I get the sense most would find this account to be oversimplified and inconsistent with their own experiences.

For an enjoyable read that broaches the topic of life as a transgender teen, and for some deeply sympathetic characters, The Art of Being Normal by Lisa Williamson gets 7/10 rainbows.

David Piper has always been an outsider. His parents think he’s gay. The school bully thinks he’s a freak. Only his two best friends know the real truth – David wants to be a girl.

On the first day at his new school Leo Denton has one goal – to be invisible. Attracting the attention of the most beautiful girl in year eleven is definitely not part of that plan.

When Leo stands up for David in a fight, an unlikely friendship forms. But things are about to get messy. Because at Eden Park School secrets have a funny habit of not staying secret for long…

Lisa was born in Nottingham in 1980. She spent most of her childhood drawing, daydreaming and making up stories in her head (but never getting round to writing them down). As a teenager she was bitten by the acting bug and at 19 moved to London to study drama at university.

Following graduation, Lisa adopted the stage name of Lisa Cassidy and spent several happy and chaotic years occasionally getting paid to pretend to be other people. Between acting roles she worked as an office temp and started making up stories all over again, only this time she had a go at writing them down.

One such job was at The Gender Identity Development Service – a specialist NHS service for young people struggling with their gender identity. The stories Lisa heard inspired her to create a fictional teenage character exploring these issues.

Lisa lives near Hampstead Heath with her boyfriend, Matt, where she is lucky enough to split her time between writing and acting. In her spare time she reads a lot of books, continues to daydream and eats way too much ice cream.